After three weeks of traveling, we were ready to head home!  We booked award flights from Chiang Mai to Washington, DC which provided a long, 12 hour layover in Bangkok.  We left Chiang Mai mid-morning for our quick one hour flight to Bangkok.

Both the flight segment to Bangkok and then onward to Tokyo were with Thai Airways.  Thai Airways is a member of the Star Alliance (much like United Airlines, Lufthansa, etc.), and while it doesn’t fly across the Pacific Ocean to the United States anymore, it has a variety of long-haul flights to various European destinations.

Even though the flight was only one hour long, Thai Airways flew a Boeing 777 for our particular flight.   Totally overkill, but we weren’t complaining.

We had more room than we knew what to do with in our lie-flat seats.

Each seat also had a nice sized TV screen and compartment underneath for your feet when the seat was turned into a bed.

Even in the middle seats, there was a good amount of privacy if you were to decide to take a snooze.

Since it was a quick trip, we didn’t expect a huge meal service.  And in reality, we planned on eating our way through Bangkok anyway.  There weren’t any options, and everyone received the same seafood omelette with chocolate mousse.

I normally say it that breakfast is the easiest meal to execute on an airplane.  Scrambled eggs, potatoes, bacon…. how hard can it be too get it wrong?

Unfortunately, the seafood omelette/noodle dish was very disappointing.  I would have preferred the spring rolls Bangkok Airways served in economy class over this dish.

That still didn’t prevent me from eating over half of it.

Even though the seafood omelette was a dud, the chocolate mousse was awesome.  Just what you want for breakfast, right?

We had about 25 minutes after the meal service before landing in Bangkok, and Taryn found perhaps her new favorite TV show of all time: Puppies vs. The World.

It’s basically a show about puppies trying to climb stairs, swim, sleep in odd positions, etc.  Taryn could NOT control herself.  I thought the flight attendant was going to tell her to quiet down because she was laughing so loudly.

Soon we landed in Bangkok around 11:00am and had about 12 hours before on next flight to Tokyo.  Even with the long layover, we were able to check our baggage through to Washington, DC, so we were able to explore the city with just our small carry-on bags.

We enjoyed another Thai message, another bowl of khao soi, more street food, and rooftop cocktails at sunset.  We decided to head back to the airport about three hours before our departing flight to Tokyo and hang out in the Thai Airways business lounge at the airport.

Thai Airways has one business class lounge in the airport.  It was modern, spacious and clean… at least when we first arrived.  Thai Airways apparently has many late night flights, and the lounge was soon overrun with passengers.  There wasn’t an empty seat in the whole lounge; a few families even took over the conference rooms and stake it as their territory.

We were lucky to claim seats earlier in the night, but since it became loud, crowded, and messy,  we looked forward to boarding the plane and and sleeping on our overnight flight to Tokyo.

For the flight to Tokyo, the aircraft was again a Boeing 777.  It was a slightly different version than the one we flew earlier in the day, but for the most part, the seat design and amenities were the same.

The seat controls and TV remote control were located in the armrest.

Since there was so much space between the seat and the TV itself, the remote control in definitely a must.

For the flight, each business class seat came with a small amenity kit.  The kit included a comb/brush, an eyeshade, earplugs, toothbrush/toothpaste, mouth wash, chapstick, lotion, and slippers.

Shortly after boarding, the flight attendants handed out glasses of champagne.

The flight attendants also passed by to take our meal orders.

For most flights, meals are served shortly after takeoff.  However, because the flight departed just before midnight, the meal service was delayed until shortly before arrival.  That way passengers can sleep through the night and enjoy a larger meal at a more appropriate meal time.  Who wants to have a multi-course dinner at 1:00am, right?

So the menu included a few options in case someone wanted a midnight snack:

And then the menu offered three different breakfast options: Thai, Western, and Japanese. 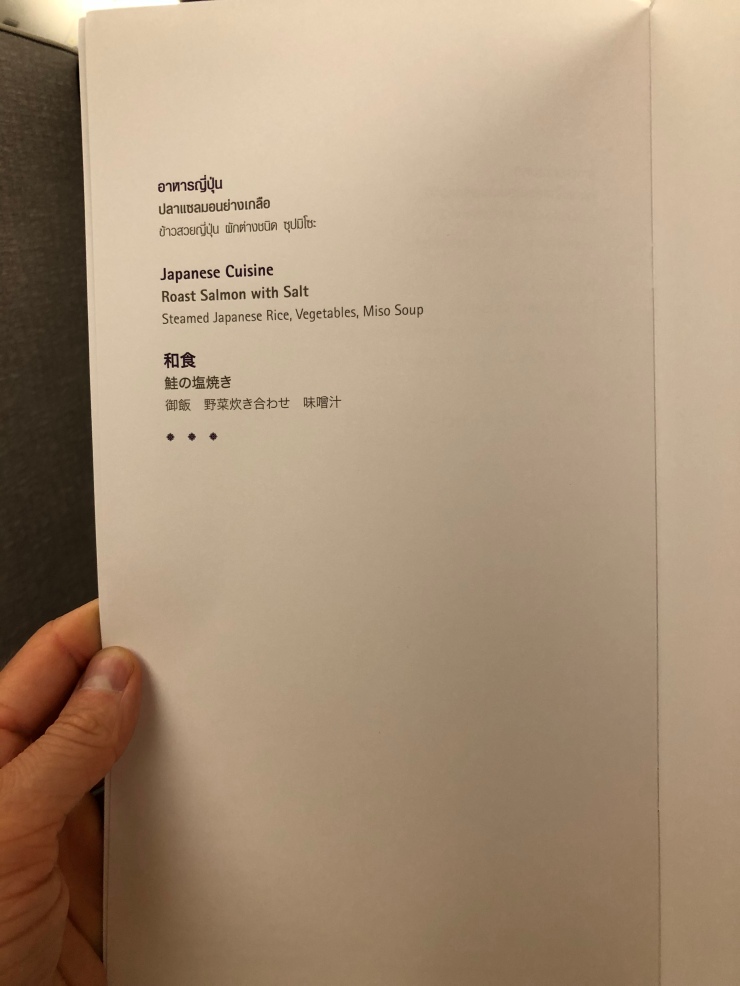 Since I was disappointed with the Thai-style omelette from earlier in the day, I decided to go with french toast casserole.

We took off and the cabin lights quickly came off.  Passengers started adjusting their seats to lie flat, and just before I starting hitting my own seat controls, the flight attendant asked if a drink.  I decided to have a nightcap of whiskey, which they served with a small side of nuts.  It’ll help me sleep better, right?

After finishing my drink, I turned my seat into a bed and went to sleep.  And I slept like a total rock.  Maybe it was the seat.  Maybe it was because it was 1:00am.  Or maybe it was that last whiskey?  No matter the reason, it was the best night’s sleep I ever had on an airplane.  Taryn felt the same way.

About an hour before landing, the flight attendants turned on the cabin lights and starting the meal service.  Since it was only one tray of food rather than multiple courses, breakfast was quick, easy, and delicious.  Thai Airways, you redeemed yourself after a disappointing first breakfast.

It was everything I could have wanted in an airplane breakfast.

Another thing that impressed me was the relative silence onboard throughout the flight.  There were 42 business class seats, but since business class was split up into two smaller sections, the separate “cabins” felt more intimate and helped isolate some of the typical noises you might hear (dishes and silverware clinking together, snoring, etc.).

We landed into Tokyo a little earlier than expected, which meant Taryn and I would have plenty of time to shower in the ANA business class lounge and prepare for our even longer flight home to Washington, DC.

Overall, I have mixed feelings towards Thai Airways.  The seats were incredibly spacious and comfortable, especially for our relatively short flights within Asia.  The business class lounge at the Bangkok airport was also modern with a variety of different food options.  However, the in-flight meals were hit or miss, and the airport lounge became so overcrowded that we considered hanging out in the main terminal before the flight.

With that being said, Taryn and I both agreed that the sleep during our flight to Tokyo was the best plane sleep we had ever had.  Surprisingly, it was one of the most enjoyable flights we had during our whole trip.

Usually when we Americans have an overnight flight from the United States, it’s to Europe which means we lose six hours during our “overnight” flight.   The time change means that we have a harder time sleeping on the flight.

But since there’s only a two hour time difference between Bangkok and Tokyo, we were able to both sleep and eat at more appropriate times for our biological clocks.   Maybe that’s why we found the flight so enjoyable?

Highlights from our around-the-world adventure: Our Around-the-World Trip