During our RTW trip, we flew Singapore Airlines from Colombo, Sri Lanka to Singapore.  Award space was plentiful, and it was a convenient “overnight” flight, which would help us maximize our three-week vacation.

I say “overnight” because the flight was scheduled to leave Colombo at 1:10am (Sri Lanka time) and arrive into Singapore at 7:40am (Singapore time).  Since the time difference between the two countries is 2.5 hours (yes, 2.5), it was actually only a four hour flight.  Not exactly enough time to really have a good night’s rest.  Still, we were excited to experience Singapore Airlines business class for the first time.

The Colombo airport was a chaotic mess, so we boarded the plane as soon as possible.  We found our seats at the back of the business class cabin.

The flight attendant wore Singapore Airlines’ colorful uniform and offered newspapers as business class passengers took their seats.  It was 1:10am, which is evident based on this picture:

Taryn was recovering from the sunburn she received in the Maldives, so no photos for her.

After making the rounds with different newspapers, the flight attendant stopped by again with a tray of juice, wine, and champagne.  Naturally, we picked the champagne.

I explored the business class seat, which were more than adequate for the four hour flight.

Somewhat surprisingly, the seats did not come with amenity kits.  Yes, it’s only a four hour flight, but since it was Singapore Airlines business class,  I was hoping that they’d throw something small together for the business class passengers.  Instead, they offered a few freebie lotions, toothbrushes. etc. in the business class bathrooms.

The remote control for the entertainment system was in easy reach. 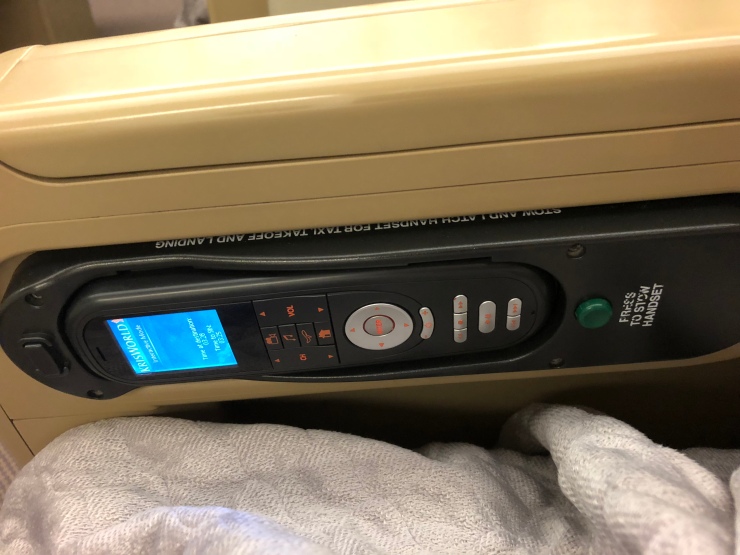 And the seat controls were neatly tucked into the armrest.

You could control individual components of the seats, including additional lumbar support.   You also had the option to control pre-set seat positions, such as the full-upright position, a relaxed seated position, what we’ll call a “lounging” position, and then the angled-flat position.

Yes, you can tell that the seat goes flat… but it doesn’t actually lie-flat; there’s a slight angle when the seat was in the last position.  Not ideal when we originally intended for flight to be “overnight,” but not horrible.

I also took a look at the extensive menu.  While they skimped on some of the business class elements (no amenity kits, angled-flat seats), Singapore Airlines still brought their A-game with the in-flight menu. 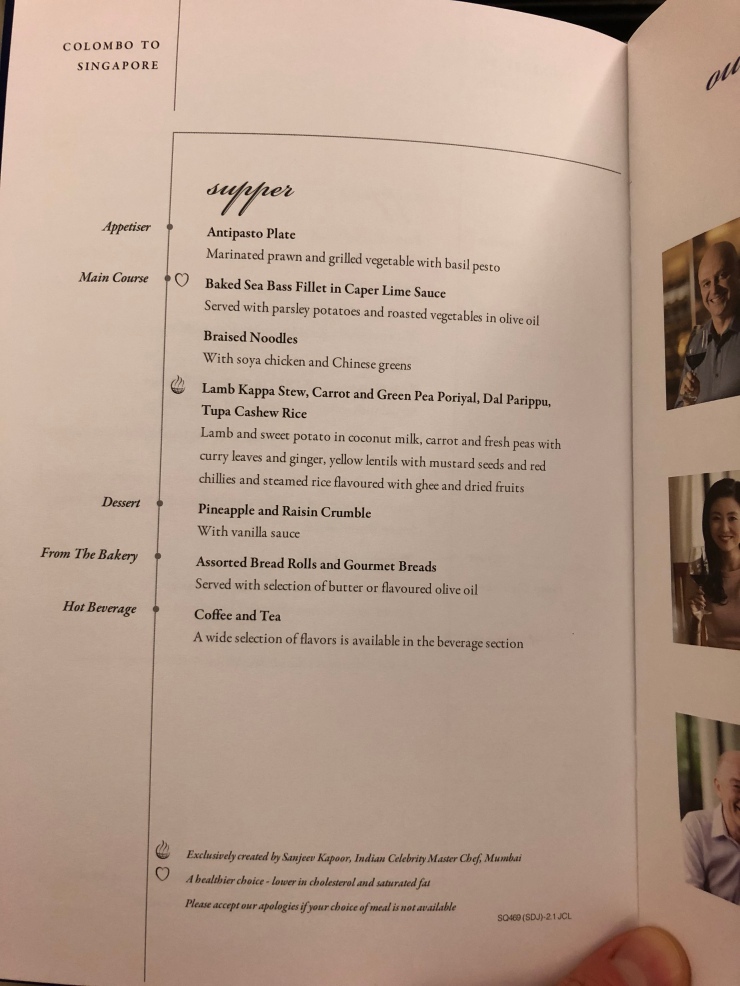 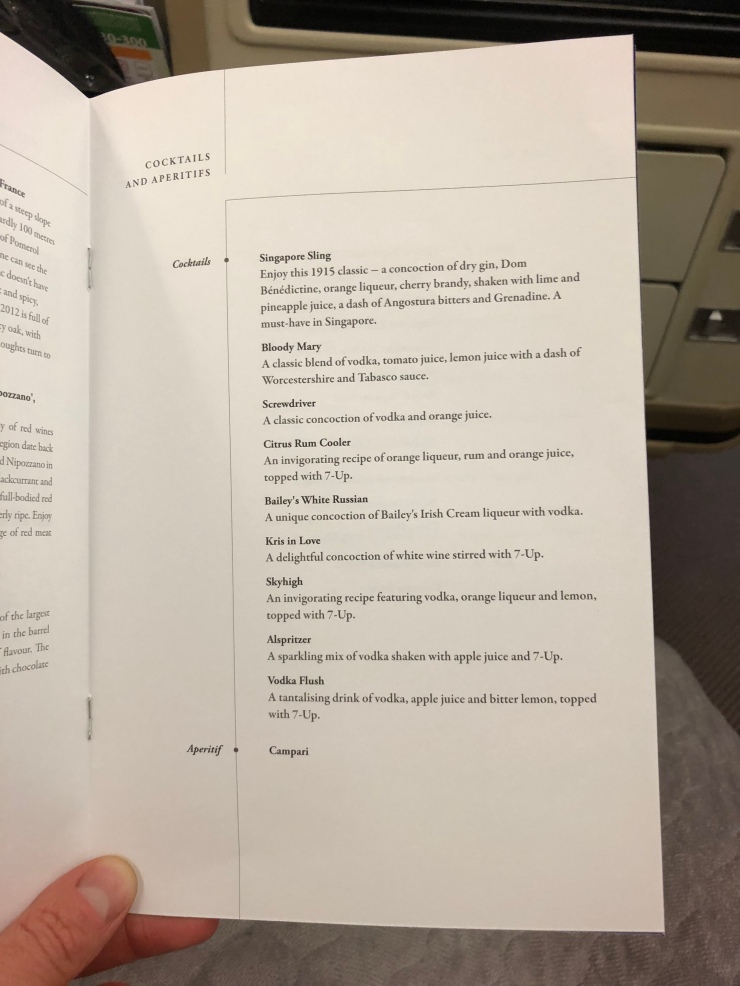 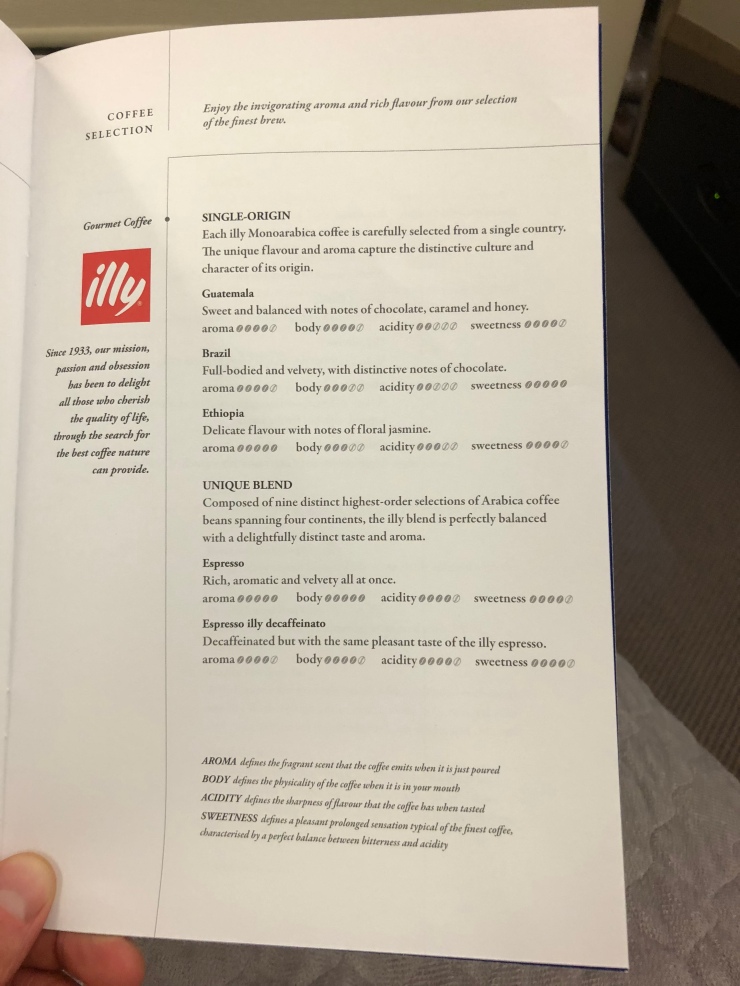 I was impressed with the food options, but I was blown away by all of the different drinks.  Champagne, white wines, red wines, port, custom cocktails, cocktails, beers, single-origin coffees, specialty coffees, and two pages of teas.  All for a four hour flight across the Indian Ocean!

I wish I had more time to explore the different drink options, but I knew the flight was too short and that I should sleep instead of throwing back a dozen different teas.

The meal service began shortly after takeoff.  The flight attendant first took drink orders, and because we were flying to Singapore, we felt obliged to have our first Singapore Slings.  The drinks also came with a tray of warm nuts.

Shortly after passing our drinks, the flight attendant set up our tray tables with a white linen tablecloth and distributed the prawn antipasto plates.  Since Taryn doesn’t eat seafood (I know, right?), I was able to eat two.

After the prawn salad came the bread, and then the main course.  Since I’m all for trying the local cuisine, I opted for the lamb curry dish.

While the tray with cutlery and dinnerware were elegant, the curry was less so.  Don’t get me wrong; it was delicious and I ate everything on the plate.  But I found the paper coffee filter-like dividers a bit off-putting.  Maybe some people are very particular with their preferred ratio of curry to rice.  Or maybe I’m just a total amateur and that’s how this dish is supposed to served.  In any case, “A” for taste, and a “C” for presentation.

After clearing away the trays, the flight attendant made one final pass to hand out the dessert course.

The dessert pastry was unique and delicious.  I’m not sure if I would have ever picked a pineapple and raisin combo for dessert, so I was pleasantly surprised.  And it seemed more like the kind of dessert you’d expect in Singapore Airlines business class.

After dinner (and another round of drinks), it was time to attempt to sleep.  I leaned the seat back as far as it could go, but I was a little disappointed with the angled-flat seat.

I mean, I’m flying for free in Singapore Airlines business class, so I shouldn’t be so picky, right?  And we knew it wasn’t a lie-flat seat.  But this angled-flat seats combined with the four hour “overnight” flat didn’t make for a restful flight.

The cherry on top was the lack of foot room.  I couldn’t actually sleep with my toes up because of the way the angle-flat seat slid beneath storage containers.

Between the meal service and then preparing for landing, we didn’t exactly have a lot of time for sleep anyway.  So joke was on us for thinking this “overnight” flight would be just like a night in a hotel.  While the meal and service exceeded our expectations, the angled-flat seats left a lot to be desired.

The worst part?  Once we landed in Singapore, it was 7:40am… which means we wouldn’t be able to check into our hotel room for another 6+ hours at the earliest.  At least we learned about a way cooler name for the airport moving sidewalks.

Highlights from our around-the-world adventure: Our Around-the-World Trip